Soft condensed matter physics studies systems that are mechanically soft such as colloids, emulsions, surfactants, polymers, liquid crystals, and various biomaterials including DNA and proteins. These materials display a broad range of interesting microstructures and phase behaviors and have a myriad of applications in the materials, food, paint, and cosmetic industries as well as medical technologies. Soft condensed matter physics is a relatively new area of physics and thus presents new opportunities and challenges for the development of new ideas and concepts in experimental and theoretical physics alike. Because the field overlaps with many different disciplines, the study of soft matter also offers promising developments to other fields of science including chemistry, chemical engineering, materials science, biology, and environmental science.

The soft condensed matter group currently contains four regular faculty members of the Physics Department.  Three are experimentalists with their own research laboratories, and one is a theorist. There are a number of postdoctoral fellows, visiting scholars, postgraduate and undergraduate students, and technical staff members working in the laboratories.  Due to the interdisciplinary nature of soft condensed matter physics, many group members are working in close association with colleagues from other departments in the School of Science and the School of Engineering.  The soft matter systems currently under study by the group members range from colloidal particles, electrorheological fluids, liquid crystals, and polymers to biological materials; the physics explored varies from the equilibrium structures and dynamics to nonlinear dynamics and far-from-equilibrium states.

Below is a brief summary of the research effort by each group member. For further information, please refer to their individual websites.

Research in Professor Penger Tong‘s laboratory has two primary directions. One is the study of nonequilibrium dynamics in flow systems. His main interests in this area concern the statistical properties of fully developed turbulence, high Rayleigh number thermal convection, transport phenomena in turbulent flows, pattern formation in rotating suspensions of non-Brownian particles, and the development of novel fiber-optic methods for measurements of the velocity gradient and flow vorticity. Dynamic light scattering, laser Doppler velocimetry, thermometry, and imaging techniques are used in the experiments. The other direction is the study of soft materials. He is interested in interactions, structures, and dynamics in suspensions, microemulsions, polymer solutions, and in their mixtures; particle sedimentation in simple and complex fluids; microrheology of polymer solutions, gels, and biomaterials. Small-angle neutron scattering, laser light scattering, multi-particle tracking and optical microscopy are used in the study of complex fluid systems.

Professor Ophelia K. C. Tsui is primarily interested in studying the effects of surface and/or interface confinement and frustration on the dynamics and equilibrium states of soft matter, as illustrated in polymer ultrathin films and liquid crystal systems. Investigations of these effects have led her group’s effort into many subfields of contemporary soft condensed matter physics including wetting and dewetting phenomena, adhesion, interfacial viscosity, nanotribology, dynamics of confined systems, surface dynamics, and surface or frustration induced orientational ordering. Professor Tsui is also interested in order-disorder phase transitions of solution cast block copolymer films, and various applications of atomic force microscopy including nano-mechanics and nanolithography.

Professor Weijia Wen‘s research focuses on electrorheological (ER) fluids.  ER fluids denote a class of materials consisting of nanometer to micrometer sized solid particles dispersed in a liquid, whose rheological properties are controllable by an external electric field. In particular, the ER fluids can transform reversibly from a liquid state to a solid state within one hundredth of a second. While in the solid state (with the electric field applied), its strength measured by the yield stress is a critical parameter that governs the application potential of the ER fluids. Since their discovery some sixty years ago, there has been much effort in searching for ER fluids with high yield stress, mainly due to their applications in vibration damping, clutches, and practically all mechanical devices that involve motion transmission. With more than six years of research work on ER fluids, Professor Wen’s group has recently achieved to a breakthrough. A novel type of ionic ER fluid, consisting of 70-nanometer-sized particles and harnessing an extremely high electric field across the Debye double layer, were synthesized which exhibit yield stress one order of magnitude higher than the best commercially available ER particles.  It is envisioned that the new ER fluids can be used not only in those classical applications, but also in MEMS or NEMS as replacement for microgears, reducing cost and increasing reliability and simplicity of controlled mechanical motion in the micro- to nano-scales.

Alignment of liquid crystal’s orientational order, through its interaction with the substrate, is a critical element in liquid crystal (LC) displays. As an extension of the pioneering study on such interactions [1,2], the recent research focus on this topic is on the use of micro / nanotextured substrates for producing uniform alignment of nematic LC’s orientational ordering [3,4]. The basic principle underlying this approach is “frustration,” i.e., when the elastic energy required for the boundary LC layer to following the micro / nanotextured pattern exceeds a certain threshold, it becomes energetically favorable to sacrifice the interfacial interaction energy so as to minimize the elastic energy, by making a transition to a uniform alignment. What we have found is that by using such micro / nanotextured substrates, one can achieve large pretilt angles, e.g., on the order of 40 degrees (between the symmetry axis of the nematic LC and the substrate). This has been experimentally verified [3]. Large pretilt angles are useful for making bistable LC displays, with the advantage of energy savings. 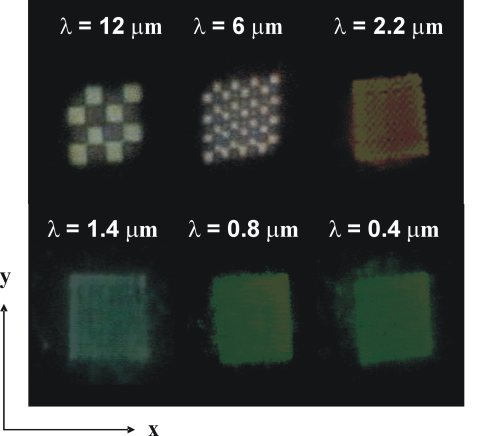 Eectrorheology denotes the control of a material’s flow properties (rheology) through the application of an electric field.  ER fluid was discovered sixty years ago.  In the early days the ER fluids, generally consisting of solid particles suspended in an electrically insulating oil, exhibited only a limited range of viscosity change under an electric field, typically in the range of 1-3 kV/mm.  The study of ER fluid was revived in the 1980’s, propelled by the envisioned potential applications, as well as the successful fabrication of new ER solid particles that, when suspended in a suitable fluid, can “solidify” under an electric field, with the strength of the high-field solid state characterized by a yield stress (breaking stress under shear).  However, further progress was hindered by the barrier of low yield stress (typically in the range of a few kPa).

Starting in 1994, we have adapted the mathematics of composites, in particular the Bergman-Milton representation of effective dielectric constant, to the study of ER mechanism(s) [1-4].  The questions we aimed to answer were: (1) the role of conductivity in the ER effect, (2) the role multipole interaction, (3) the ground state microstructure of the high-field state and, most importantly, (4) the upper bounds in the yield stress and shear modulus of the high field solid state.  Finding the answer to (4) led to the suggestion of the coating geometry for the ER solid particles which can optimize the ER effect, but at the same time also pointed out the limitation of the ER mechanism based on induced polarization.  The subsequent study of adding controlled amount of water to the ER fluid pointed to the intriguing possibility of using molecular dipoles as the new “agent” for enhancing the ER effect [5].  Working along this direction, experimentalist Weijia Wen was able to synthesize urea-coated nanoparticles of barium titanyl oxalate which exhibited yield stress in excess of 100 kPa, breaking the yield stress upper bound and pointing to a new paradigm in ER effect in which the molecular dipoles can be harnessed to advantage in controllable, reversible liquid-solid transitions with a time constant on the order of 1 msec. We propose the model of aligned surface dipole layers in the contact area of the coated nanoparticles to explain the observed giant ER effect [6], with the electric-field induced dissociation (the Poole-Frenkel effect) of the molecular dipoles accounting for the observed ionic conductivity. Quantitative agreement between theory and experiment was obtained.  There are still many intriguing questions yet to be answered regarding the GER effect.  While GER represents a big step towards realizing the application potentials of ER fluids, there are still some problems to be solved before ER fluids can become a commercial reality. 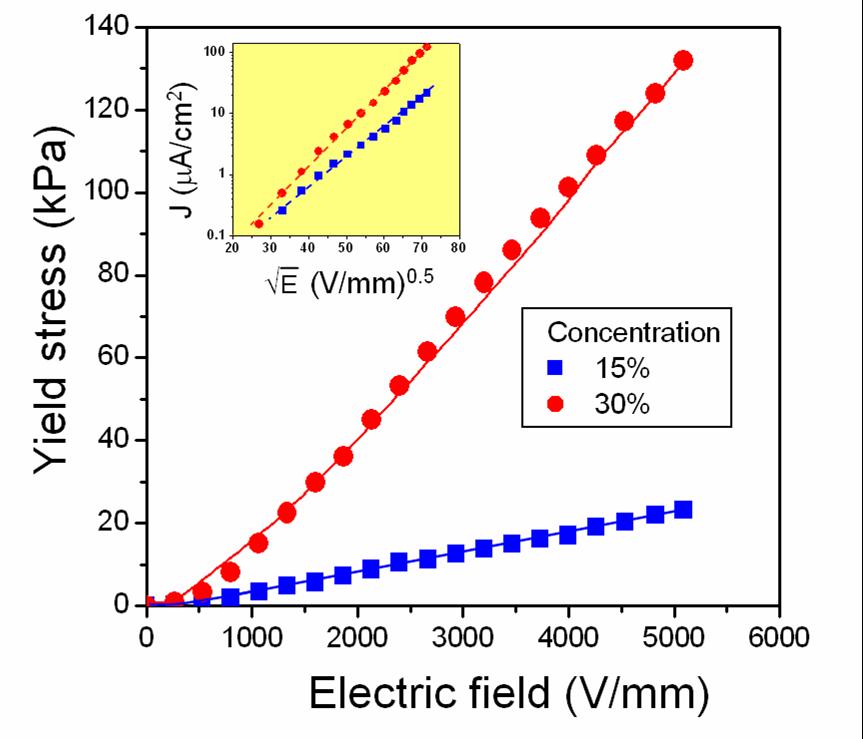 The contact line (CL) denotes the intersection of two immiscible fluid-fluid interface (such as the oil-water interface) with the solid wall, and moving CL arises when one immiscible fluid displaces the other in motion.  The moving CL has been a classical problem in hydrodynamics because it is incompatible with the non-slip boundary condition (yielding infinite dissipation). This is in spite of the fact that the non-slip boundary condition represents one of two pillars (the other being the Navier-Stokes equation) of classical hydrodynamics. While molecular dynamics (MD) simulations have clearly shown nearly total slip of the moving CL (i.e., relative motion with respect to the solid wall), no continuum boundary condition was ever found which can reproduce the MD results, leading to some proposal that hydrodynamics breaks down in the vicinity of the moving CL.  The inability of continuum hydrodynamics to calculate the behavior of the moving CL means accurate nanofluidics or microfluidics simulations would not be possible.  We have successfully resolved this classical problem, with the discovery of the Generalized Navier Boundary Condition (GNBC) for the moving contact line (CL) problem [1,2] and the formulation of a continuum hydrodynamics which yields predictions in quantitative agreement with those from the MD.  A surprising implication of this discovery is that partial slipping can occur at even low shear rates, and the transition of total slipping at the moving CL to non-slipping far away is represented by a

power law, where x represents the distance away from the moving CL.