Tunneling is usually regarded as a quantum mechanical phenomenon. However, more generally it is also a wave phenomenon. In collaboration with Prof. John Page of the University of Manitoba, we have observed tunneling by ultrasound through a phononic crystal made of 0.8 mm diameter tungsten carbide beads, immersed in water. The tunneling phenomenon is characterized by a constant pulse traversing time through the phononic crystal sample, independent of the sample thickness. Therefore one can obtain fairly large group velocities for thick samples, although in such cases the signal amplitude is small. Compared with photon tunneling through photonic crystals, we found the tunnling time to be much larger. In fact, the tunneling time is roughly inversely proportional to the gap width. Thus the much higher frequency photonic bandgap implies a much shorter tunneling time.

Apart from the tunneling through phononic bandgaps, wave propagation through the transmission band(s) of phononic crystals also present some interesting and novel behavior. In particular, we have demonstrated through both theory and experiment that at certain frequency regime of the transmission band, there can be negative refraction behavior, leading to focusing of the ultrasound. 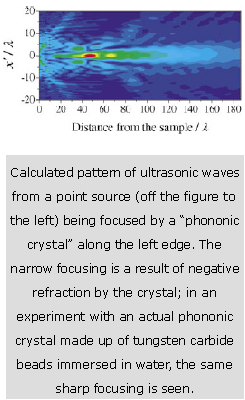